The automobile industry is easily the largest influence on the special machine tool industry. This is due to the fact that the competition in that industry drives frequent model change and, of course, because of its sheer volume. In addition, there are outside influences that necessitate frequent power train (engine, transmission, differential combination) improvements. The power train changes reflect directly on steering, suspension and braking and in turn create changes in them as well. 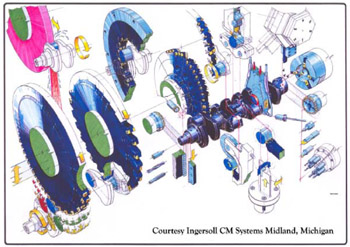 Oil prices, fuel economy and availability, and government emission, fuel economy, and safety mandates dictate design changes. In addition, technology advances have given power train designers opportunities to incorporate new ideas. For example, the advent of computer engine management and diagnostics has changed certain mechanical aspects of modern engines, not unlike the computer impact on modern machine tools. As a result, the automobile companies have had to change complete manufacturing systems, not because they were worn out, but because their product has changed and different equipment is required. That makes it apparent that flexibility, versatility, or agility would be nice to have in a manufacturing system. There are significantly different levels of flexibility and different ways to achieve that objective, which are discussed in the addenda.

Each round of change for an auto company presents an opportunity to raise the bar for engine feature and performance competition; that is, market appeal. It is also a great opportunity to take the next step forward in manufacturing technology and cost improvements through the competitive bid process with the special machine tool suppliers. It is an upward spiral for both.

Other manufacturing industries operate on different competitive cycles, do not face the annual or frequent consumer-driven model changes and are not affected by government mandated issues such as emission or fleet average requirements. So the special machine tool industry is really dominated by the automobile industry. In recent history, there is typically a program or programs underway occupying capacity for machine tools. There are times when programs from different auto companies are in phase and times when they are out of phase. In other words, there are feast and famine times.

Serious strain on the machine tool companies has come with both extremes. Since it is a highly technical and specialized business, reducing staff in a slow market means reducing capacity for the future, since experienced, capable staff is its most valuable resource and is very difficult to replace or rebuild. So imaginative ways are required to hibernate in the winter of business cycles, losing only fat and not muscle. In the opposite extreme, long hours and heavy, well-managed sub-contracting can be required to avoid an organization build up that could not be managed during the slow cycle.

The heavy vehicle or diesel engine industry has some of the same influencing factors. Due to the lower volumes and lower direct dependence on the consuming general public, their change requirements are substantially lower. Their new engine product programs are maybe a third or a quarter as frequent as automobile engine programs. It may be coincidental; however, it seems that they wait for the automobile low purchasing activity phase. Then they find bargain prices, which is good for them and good for the special machine tool industry. The machine tool companies cover their costs while keeping their organization together.

An observation that seems to be true in the diesel engine business and some others gives them some advantages. They realize lower costs because of their ability to buy at the right time, and because the auto companies have processed several more programs between them since their last one. They get but do not have to pay as much for the technological advance developments that have occurred while their manufacturing engineers just watched and learned.

Still other manufacturing industries use equipment several generations old, because it continues to function reasonably well. Their paradigm of “if it ain’t broke, don’t fix it” prevents them from taking advantage of developments subsidized by the auto companies and the free manufacturing engineering possible through competitive quoting. Remember the chainsaw piston example: a tremendous payback simply by asking the questions and energizing clever manufacturing engineers from around the world who have likely advanced considerably since the last contact.

Since the automobile companies do indeed dominate the special machine tool companies, we need to take a close look at that relationship. It has changed substantially in recent years. There are many influencing factors. Changes in both the buying and selling organizations have negatively influenced relationships.