Now that you have been given a tour of the Open Office Writer, you are ready to move on to the next application in the Open Office suite, the spreadsheet application, Calc. While word processing is probably the most common task performed on a PC by both home and business users, spreadsheets are by far the most commonly used business applications. Virtually any business of any size needs to keep financial records and perform financial calculations. For most Windows users, this means using Microsoft Excel, which is shown in Figure 9.1. 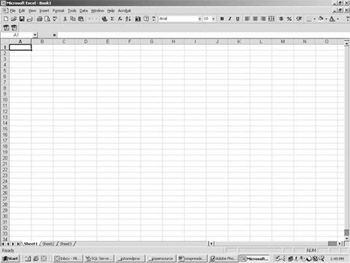 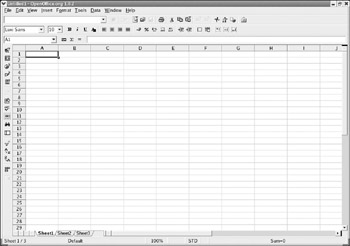 The first thing that you should notice is the similarities between these two figures. The basic layout and functionality of the two applications are nearly identical. This should not be surprising. All spreadsheet applications are an attempt to automate a bookkeeper’s spreadsheet, so the general layout should be similar. As with the word processor, the spreadsheet tool in Open Office divides the toolbar into rows. There will be some differences, but you still have essentially the same functionality with very similar icons in both Open Office and Excel. The buttons for opening files, saving files, printing, and formatting text are virtually identical. If you will note, even the drop-down menus have the same names and are in identical order in both Calc and Excel.