It’s time to turn to the task of creating custom objects in JavaScript that use some of the OO concepts I’ve explained so far.

The most crucial issue is to understand the role of prototypes, which are the JavaScript analog to classes and which play the same role as classes in providing a template for objects.

The main limitation of a JavaScript prototype as opposed to the more general concept of a class is that only one generation of inheritance is available with a prototype. With a prototype, you create many instances of objects based on the prototype. But with classes, you can have one class that inherits from another class that inherits from another class (and so on), finally creating instances of objects from the class that’s the remote descendent of the original class. This can be very powerful. But other than the ability to inherit multiple generations from a blueprint, you should think of a JavaScript prototype as a class.

I’ll explain how prototypes work as we go along. But, first, let’s look at two JavaScript keywords related to objects, new and this. The new keyword, which you’ve seen used in many examples in earlier chapters of this book (for example, you used new to create instances of Array objects in Chapter 5, “Understanding Arrays”), calls a constructor to create a new instance of an object.

The this keyword is used to refer to the current instance of an object.

Next, we’ll create the function that will be used to implement the calcArea method:

This function returns the value of the instance height multiplied by the instance width. Note that I’ve named it slightly differently than the method (calc_Area rather than calcArea). This is to emphasize that the name used to call the method, using an instance of the prototype, is distinct from the underlying function that implements the method.

Now, let’s assign the function we’ve just created to the value of the Rectangle prototype, using the prototype keyword, so that we can call it as an instance method:

Our simple Rectangle prototype is now complete. Let’s instantiate an object, named theRectangle, based upon it:

Finally, we can display theRectangle object’s current property values and call its calcArea method to display its area as shown in Figure 7-11: 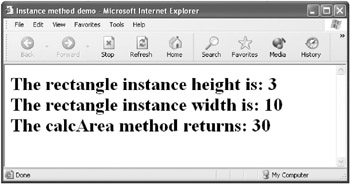 Figure 7-11: The object instance’s values of its height and width properties and the return value for its calcArea method are displayed in the browser.

Listing 7-7 shows the complete code for creating the Rectangle prototype, instantiating theRectangle object based on the prototype, displaying property values, and invoking an object method.

As opposed to instance members, to access a shared member you’re neither required (nor can) instantiate an object instance. The best way of thinking of shared members is that they’re a kind of constant value. You can also think of them as class (or prototype) variables rather than instance variables. Here are two examples of shared members in JavaScript using our Rectangle prototype:

Here is an assignment statement that uses these shared members (note that no instantiation of a Rectangle object is required):

In the “ Displaying an Object’s Associative Array ” section earlier in this chapter, I showed you how to display the array associated with the window object and other objects such as document and navigator.

You can just as easily display the members of your own objects using their associative arrays. As an example, take the Rectangle prototype and instance objects created in the previous section. If you pass the instance object to the function I showed you for displaying the elements of an object’s associative array, you’ll see the method and properties of the instance of the Rectangle object displayed, as shown in Figure 7-12.

Figure 7-12: The properties of a Rectangle instance shown using its associative array

Listing 7-8 shows the HTML page that defines the Rectangle object prototype, creates an object instance based upon it, and uses the for/in statement to iterate through the associative array of the object instance.

Listing 7.8: The Associative Array of a Rectangle Object Instance

It’s easy to add a custom toString method to your objects. In fact, it works just like adding any other method to the prototype for object instances.

Let’s take our Rectangle prototype and object instance as an example to see how to do this.

Here’s my somewhat silly function for objects based on the Rectangle prototype:

Next, assign the function that implements the toString (to_String) method to the toString method of the prototype object:

Instantiate an object based on the prototype:

Figure 7-13: The custom toString method of the Rectangle object returns some cute text.

This is kind of like magic, almost spooky. The statement document.write(theRectangle); would look like something that shouldn’t give intelligible results. (In fact, what you get without the custom toString method implementation is [object Object], which isn’t indeed very intelligible.)