Converting from Other Version Control Systems

One of the critical areas that you need to consider is how you are going to move your data from your current version control system to Team Foundation Server. Obviously, you want to retain as much history and information as you can from your old system, while converting the necessary pieces into the new Team Foundation Version Control terminology, such as changesets. Using the Team Foundation Server Object Model, you could create your own conversion utility. That is one option. If you are using a custom-built version control system right now, that is probably your only option.

However, if you are using one of the major third-party tools now on the market, such as CVS, Subversion, or Visual SourceSafe, then you have another option. Microsoft provides free with Team Foundation Server a conversion tool called VSSConverter, which allows you to convert Visual SourceSafe information into Team Foundation Version Control. And third-party companies, such as ComponentSoftware (.componentsoftware.com) are providing utilities to convert Subversion, CVS, and several other version control systems, including Visual SourceSafe.

While you won't see a specific example of converting Subversion or CVS to Team Foundation Server, the CS-Converter tool by ComponentSoftware will convert these version control systems in a manner similar to the one shown for Visual SourceSafe.

The VSSConverter tool is provided free with Visual Studio Team System by Microsoft, for use in converting your Visual SourceSafe projects into Team Foundation Version Control. This tool is located at c:\Program Files\Microsoft Visual Studio 8\Common7\IDE\VSSConverter.exe. It is a command-line only tool, which uses XML configuration files to convert a single VSS project or an entire VSS database, depending on how you configure the application to run.

All the code mentioned here is available for download at wrox.com.

Before you get started with VSSConverter, you need to briefly understand what it will and won't do for you. VSSConverter does its best to convert as much of the historical information in the VSS database over into Team Foundation Server Version Control. However, some features of VSS, such as sharing, are not supported in TFS. As such, any historical information related to the use of these features will be lost.

The history for all the following items will be preserved with VSSConverter:

The following actions are not supported in Team Foundation Server, and all historical information related to these actions will be lost:

While branching is supported in Team Foundation Server, it is not supported in the manner that VSS used it. In VSS, sharing a file was a prerequisite to branching the file. When migrating a branched file, the original file is copied to its destination folder. At the point of the branch event, any changes made to a branch are copied to their appropriate area in Team Foundation Version Control.

There are two other things to be aware of when using VSSConverter. The conversion tool does not modify the source control bindings on the files. The files will still think they are bound to Visual SourceSafe when you try to open them. You can either change the bindings before you open the files, or Visual Studio 2005 prompts you to change them when you try to open them.

Before you can begin converting your project using VSSConverter, there are some things you need to do, and some security issues you need to be aware of.

First thing you need to do is find a machine to run the conversion on. This machine will need the following software installed on it:

You need to log into the conversion machine with administrative privileges. Also, you will need to know the administrator password for your VSS database.

Finally, you need to go ahead and create a new team project, or a folder in an existing team project, to convert the VSS information into.

Let's get things set up for you to covert the example in this chapter. Go ahead and install all the prerequisites. Using the downloaded code for this chapter, unzip the MyVSS.zip file to c:\MyVSS on your conversion machine. If you like, you can open Visual SourceSafe 2005 and connect to this database, to view the files, as shown in Figure 12-20. This database contains two projects, VSSTest.root and VSSTest ver2. For this example, are just going to convert the VSSTest.root project. 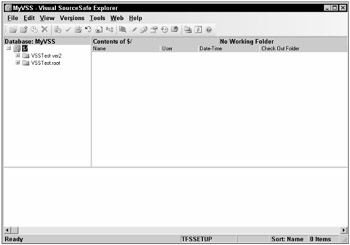 Open Team Explorer, and create a new Team Project called MyConvertedVSS. Go ahead and associate with the version control system when the project is created, using $/MyConvertedVSS.

Finally, you need to be a member of the sysadmin role for SQL Express. If you were logged in when you installed SQL Express, then you are added to this group by default.

Once you have the conversion machine configured, you are ready to analyze the projects you want to convert. This analysis will look at the VSS projects, and notify you of any potential errors or loss of data that may occur with the conversion. To run this analysis, you need to create a XML configuration file that contains the settings for the VSSConverter tool. The configuration file contains the following information:

After the VSSConverter has run its analysis, it outputs an analysis report. This report is located in the same directory as you ran the conversion analysis from, and is called VSSAnalysisReport.xml. Figure 12-21 shows the report for our example: 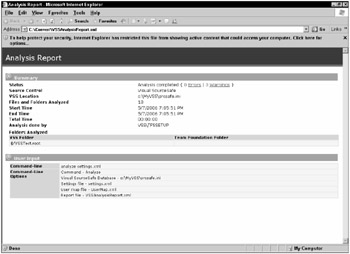 This report shows you the number of files and folders that were analyzed, and will list any potential warnings or errors that may occur during the actual conversion. It will give you a good indication of how your conversion process will go, and what things you should watch out for, or check for after the conversion is complete.

Now that you have reviewed the analysis results, you are ready to proceed with the conversion. Before you begin though, you need to make some more changes to the settings.xml file. As well, the analysis run has added another configuration file to your directory, the UserMap.xml file, which also needs your attention.

The following is an example of what the UserMap.xml file would look like:

For our example, the UserMap.xml file looks like this:

Feel free to add users to the TO attribute, or leave them blank if you wish.

You need to make some changes to the settings.xml file before the actual conversion can be run. If you are going to be using a UserMap.xml file, you need to add the following tag in the <Source> tag, just under the <VSSDatabase> tag:

This tag tells the VSSConverter application that you want to use a user-mapping file and where the UserMap file is located.

For each of the <Project> tags, you need to add a Destination attribute. This attribute tells the VSSConverter application where in the Team Foundation Version Control system to covert the VSS project:

Finally, you need to add a new set of tags after the <ConverterSpecificSetting> tag. This tag is called <Settings> and is used to define which Team Foundation Server you want to convert to:

You specify the name of your Team Foundation Server, the port number (most likely 8080), and the protocol (either http or https).

So, for the example, after making the appropriate changes, the settings.xml file should look like this:

You are using the UserMap.xml file located in the C:\Covert directory. You are converting to the MyConvertedVSS Team Project, so you added that to the Destination attribute. And you have added the appropriate Team Foundation Server settings for your server.

You are now ready to run the conversion.

To start the conversion, go back to the command prompt you opened earlier, and while still in the C:\Convert directory:

When the conversion is finished, it writes out a report to the file VSSMigrationReport.xml, as shown in Figure 12-22. 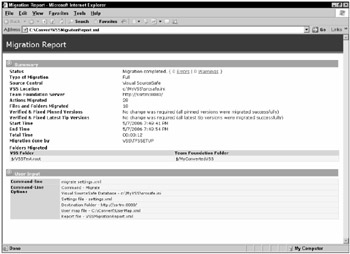 This report gives you the details of the conversion, including any possible warnings or errors that may have occurred, so you know what to look for in Team Foundation Server.

Of course, the true test of the conversion will be to see it in Team Foundation Server. Once you have converted the example, open Team Explorer, and navigate to the MyConvertedVSS Team Project. Double-click the Source Control icon in the project to open Source Control Explorer. You can then drill down into the MyConvertedVSS folder, and verify the files have been converted, and the history has been maintained, as shown in Figure 12-23. 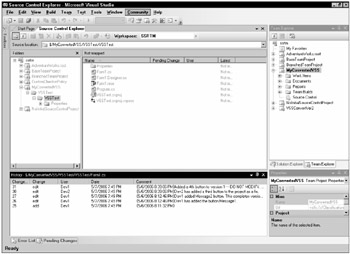 There you go, you have successfully migrated a Visual SourceSafe project into Team Foundation Version Control!

As you have seen, Microsoft provides a free tool, VSSConverter, for converting your Visual SourceSafe information over into Team Foundation Version control. One drawback of the tool is that it is completely command-line driven, requiring you to run the conversion from the command prompt, as well as edit XML configuration files by hand. Another potential issue is that the VSSConverter application can only be used to convert Visual SourceSafe projects, so users of other version control systems, such as Subversion or CVS, must find other means to convert their information into TFS.

One solution is to make use of the Team Foundation Server Object Model, and create a customized tool for running the conversion. However, if you do not want to go that route, there are some third-party tools on the market that will do the conversion for you. One of these tools is CS-Converter, by ComponentSoftware (componentsoftware.com).

CS-Converter is a graphical conversion tool, which can be used to migrate a variety of version control systems, including Subversion, CVS, and Visual SourceSafe, onto Team Foundation Version Control. One of the main benefits of a tool such as CS-Converter is that it is a graphical conversion tool, making it easier to use by a majority of people. Another benefit is that it is able to convert so many different other systems to Team Foundation Version Control.

According to the help file for CS-Converter, it has several advantages of VSSConverter. For example, when converting the information, it keeps the original check-in timestamp, instead of updating the timestamp to the conversion date. It also provides the ability to graphically map user names from VSS to TFS, by selecting the appropriate user from a drop-down list box.

The CS-Converter help file does a great job of providing a step-by-step example of converting from VSS to TFS, so you won't go into that here. If you are interested in a graphical tool for converting Visual SourceSafe, or need a tool to convert from Subversion or CVS, it is recommended you investigate this product more on your own. Figure 12-24 shows a screenshot from CS-Converter. 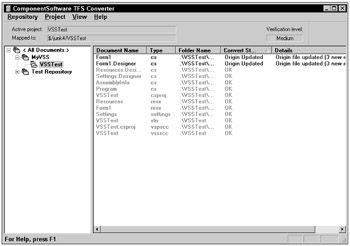