Most of us will spend at least some of our time creating and maintaining office documents such as word-processing documents, spreadsheets, and presentations. Therefore, this chapter begins with an introduction to the office productivity applications available within Linux.

Because these office tasks are so important, Fedora comes with a number of different office applications. Some of these applications are rich in functionality and compare very favorably with the likes of Microsoft Office, whereas others are smaller in size but still worthy of mention. These applications should be enough to meet your requirements ”and if not, there are even more office application suites for Linux available via the Internet.

This section begins with a brief survey of all the office application suites included with Fedora. We can t cover them all in depth because there isn t room, but you should get an idea of what you can achieve by taking a closer look at OpenOffice , the standard office suite in Fedora.

Red Hat Linux shipped with OpenOffice 1.0, so what s new in OpenOffice 1.1? Red Hat put a great deal of effort into fixing bugs , making the latest version of the suite even more reliable. The Office compatibility has been enhanced, allowing for better accuracy when importing and exporting Microsoft Office files. In addition, a number of new features have been added, these including the following:

For more details, take a look at www.openoffice.org/dev_docs/features/1.1 .

The following office application suites are all available with Fedora:

Most of the packages for the default office and productivity applications are listed within the Office/Productivity package group , which you ll find under the Applications category of the Package Manager application that is discussed in Chapter 8. (There are one or two exceptions; for example, GIMP is listed in the Graphics package group.) 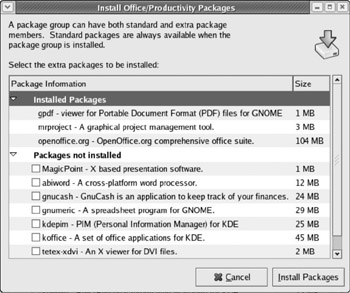 You can safely install any (or all) of the remaining packages alongside OpenOffice simply by selecting the packages you want to install and clicking the Update button. (You ll need the distribution disks to complete the installation.) You can experiment with these applications at your leisure, choose your favorites, and (if you wish) uninstall the others later on.

We ll spend the remainder of this section looking at some of the applications in the OpenOffice suite. Note that you can find the latest information and downloads for OpenOffice at www.openoffice.org . This site has OpenOffice downloads for a variety of platforms including Linux, Windows, and Mac OS X. You ll also find localized dictionaries, documentation, and support facilities to help you get the most from these applications. 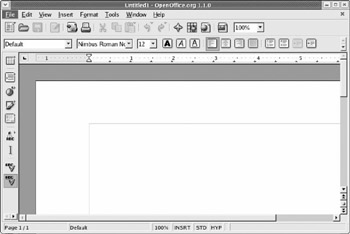 In addition to the menu shortcuts, the OpenOffice installation process also places three shortcut icons within the taskbar at the bottom of the screen, as shown in Figure 4-3; these are for the Writer, Impress, and Calc applications, respectively. To invoke any of these applications, just click the icon.

By default, the executable files are installed into the /usr/bin directory, which is part of the $PATH environment variable. This means that you can run any of these applications simply by typing its name at the command line.

The following table lists the commands for some other applications in the OpenOffice suite.

To begin, take a look at some of the elements that are common to all the applications in the OpenOffice suite.

The diagram in Figure 4-5 demonstrates these areas as visible within an OpenOffice application. 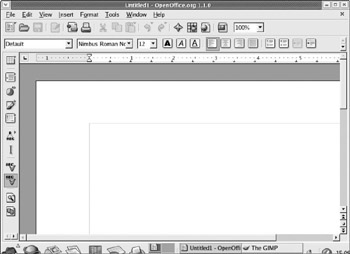 You can choose to hide some of these toolbars via the View>Toolbars menu option. Unlike Microsoft Word, OpenOffice doesn t allow you to undock the toolbars or move them around the screen. However, you can customize the contents of a toolbar either by right-clicking a toolbar and selecting Customize, or by selecting View> Toolbars >Customize from the menu.

The toolbars vary from application to application, although the Function, Object, and Main toolbars are common to all the OpenOffice applications.

One thing that many first-time Linux users worry about is whether their Microsoft Office documents are compatible with OpenOffice. For example, you may wonder if it is possible to do the following:

You can configure these options by accessing the Options dialog box from the Tools>Options menu from any OpenOffice application (see Figure 4-6). 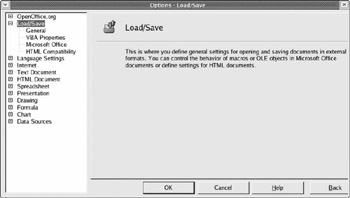 Of particular interest here are the options found under the Load/Save node on the left of this dialog box. Only those options associated with compatibility with Microsoft Office are covered here.

The option of interest here is the default File Format that is used when you save a document. You can see this option at the foot of the General tab, as shown in Figure 4-7. 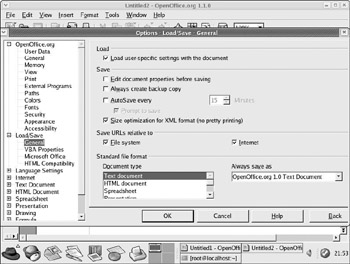 It is here that you can select the default format that the application will use whenever you ask it to save your document to disk (for example, using File>Save). As you can see from the preceding figure, when you first install OpenOffice this default document type is set to the OpenOffice.org.1.0 format.

If you want to work with Microsoft Office file formats only, it is here that you should change this default setting. This can be particularly useful if you transfer files between home and work often, and you don t want to forget to save in the correct format. For example, suppose you use Microsoft Word XP at your place of work and OpenOffice s OpenWriter at home. If you regularly create documents at home for use at work, you can configure OpenWriter to save your documents in Microsoft Word 97/2000/XP format by default, so that these documents are compatible with the software at your place of work.

Your documents might contain code written using Visual Basic for Applications (VBA) . OpenOffice applications can handle VBA code in a number of different ways, but support is limited to documents that originated in Microsoft Word 97/2000, Microsoft Excel 97/2000, and Microsoft PowerPoint 97/2000.

OpenOffice supports VBA through the dialog box shown in Figure 4-8. 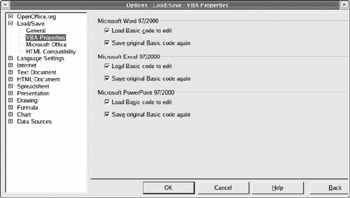 There are two options for each of the three office applications that support VBA code embedding. They are explained in the following table.

Microsoft Office s applications also allow users to embed objects of one type within another. For example, if you want to show sales data from a spreadsheet within your sales report, you can easily embed your Excel spreadsheet within your Word document. In Microsoft parlance, this is known as Object Linking and Embedding (OLE) . With OLE, the embedded object inherits the functionality of the application it was created in (so in the example cited here, the embedded Excel spreadsheet inherits the functionality of Microsoft Excel, even though it is embedded into an Microsoft Word file).

The Options dialog box in OpenOffice allows you to select which objects are converted (if at all) and at which stage ”when the object is loaded into OpenOffice and/or when saving from OpenOffice into a Microsoft format (see Figure 4-9). 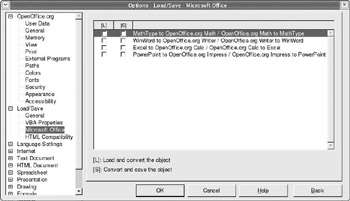 As you can see from Figure 4-9, there are four object types supported, including Microsoft Word (WinWord), Microsoft Excel, Microsoft PowerPoint, and MathType.

This dialog box doesn t offer any features for converting between versions of Microsoft Office, but it does contain the setting that indicates what browser is targeted when exporting a document from an OpenOffice application in HTML format (see Figure 4-10). OpenOffice supports a number of formats, including the following:

However, it s also worth noting the existence of a generic document conversion tool called AutoPilot, which is accessible from all OpenOffice applications. If you select File>AutoPilot>Document Converter, you ll see a dialog box like the one in Figure 4-11. 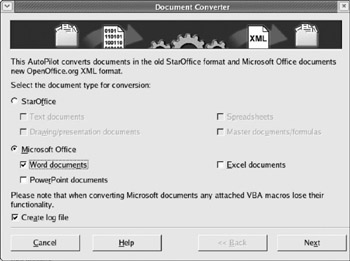 After pressing Next, you ll see the dialog box shown in Figure 4-12. It prompts you to say whether you wish to convert templates, documents, or both, and whether you are to include subdirectories in your conversion process. In this case, we re converting only Word documents from our working directory and placing the converted files in the same directory. 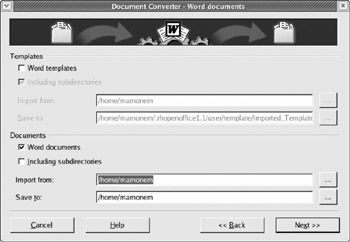 When you click the Next button again, you see a confirmation dialog box, shown in Figure 4-13. If you re happy that everything is present and correct, select the Convert button and the conversion process begins. 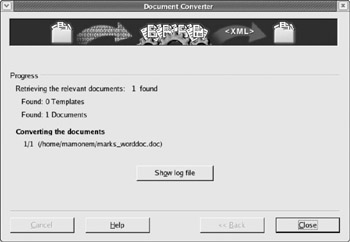 The conversion quality between different file formats ( especially Microsoft Office) is excellent . The only caveats are that the conversion process from OpenOffice to Microsoft Office can lead to files larger that their original file sizes due to the lack of compression. However, this is likely to change in future releases.

When you start the Writer word processing application (which you can do using Main Menu>Office>OpenOffice.org Writer or the shortcut icon from the task bar), you are presented with a window like the one shown in Figure 4-14. 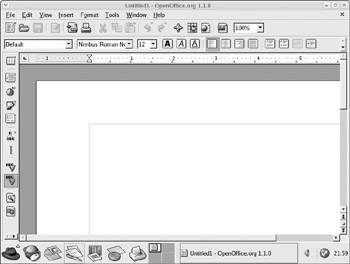 Writer provides the wealth of features that one would normally expect to find in a commercial word processing application. We won t list them all here; like the other applications in the suite, it would warrant a book in its own right. However, we will highlight some of the key features included and also describe how interoperability with other applications such as Microsoft Office is achieved. Some of the key features are as follows:

As you ve seen, Writer is compatible with Microsoft Word. In particular, it is capable of loading and saving documents and templates in a number of Word file formats, including Microsoft Word 97/2000/XP and Microsoft Word 6.0/95. You can load and save between OpenOffice s native version and any of the other versions listed simply by using the File>Open and File>Save dialog boxes. The File Type drop-down list box allows you to choose the appropriate format (see Figure 4-15). 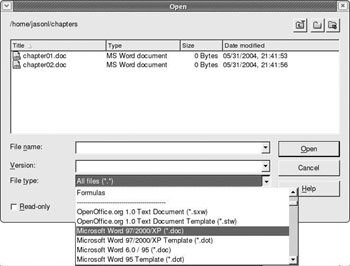 The Calc (or Calc ) application again provides numerous features that you would expect of a commercial application and is comparable to Microsoft Excel, the spreadsheet application within Microsoft Office. Some of the key features include the following:

Calc also supports compatibility with Excel through its ability to load and save spreadsheets and templates in a number of Excel file formats, including Microsoft Excel 97/2000/XP and Microsoft Excel 4. x “5.0. Other interoperability features include the handling of VBA code and embedded objects (as mentioned earlier in this chapter).

Other, more specific options mimic the behavior of Microsoft Excel, and help to make users with an Excel background feel more comfortable. One specific such option is the ability to indicate that OpenCalc s searching capability should behave in the same manner as Excel s. This option can be found in the Tools>Options dialog box, in the Spreadsheet>Calculate tab (see Figure 4-16). 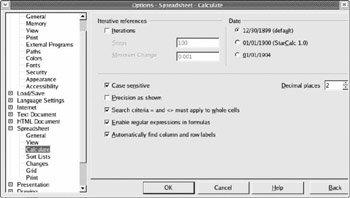 The Impress (or Impress ) application again provides many of the features that you would expect of a commercial application, and is comparable to Microsoft PowerPoint, the presentation management application within Microsoft Office. The key features of Impress include the following:

Impress supports compatibility with Microsoft PowerPoint, in its ability to load and save presentations and templates in PowerPoint s file format (PowerPoint 97/2000/XP).

It s worth experimenting with the applications installed within the OpenOffice suite to learn more about what they re capable of doing. Here s a brief summary of each: