It is important to distinguish data, information and knowledge (see Figure 21.1). Data are the symbols perceived by an observer through sensors. From these data emerge information, that is data with a strong semantic content as a result of an interpretation process. The observer's knowledge permits association of the semantic content with data. The following step is a process of appropriation and reasoning that leads to the integration of the information in the background knowledge of the observer. 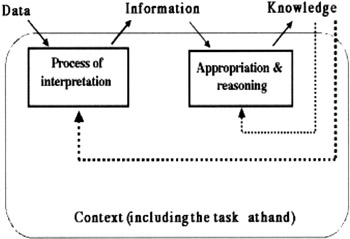 Thus, knowledge has several roles: (1) the transformation of data to information, (2) the derivation of new information from that existing, and (3) the acquisition of new knowledge. Knowledge is thus simultaneously a result and a process.

Figure 21.2 presents four types of movements between these two types of knowledge: 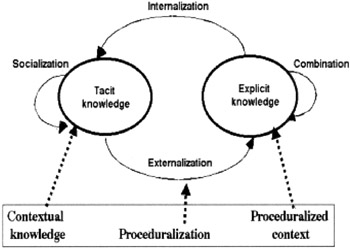 Figure 21.2: The context and the movements between tacit and explicit knowledge

Here, the process of externalisation interests us particularly with respect to context because it anticipates the process of proceduralisation leading to the proceduralised context, which will be discussed in the next section. Note that, more generally , the relationships between knowledge and context (see Figures 21.1 and 21.2) can be summed up as [Pomerol, 2001]:

Making context explicit in terms of knowledge permits identification in a better way that is necessary for a system (or an object) with respect to a user at a given time according to the available data, information and knowledge.

2.2 Identification of the context 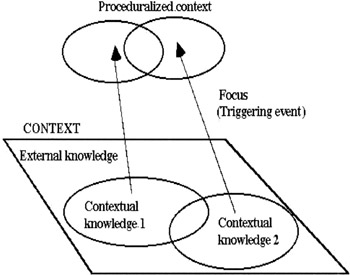 Figure 21.3: The three types of context

In the framework of communicating objects, we think that objects must share a reference, a shared source for data, information, knowledge and context. This referential will be updated regularly and shared by objects. Thus, different communicating objects (for example, inside a house) can coordinate their activities according to the knowledge that can be useful for them (their respective proceduralised context) and knowledge of other objects (a part of their contextual knowledge).

2.3 Lessons learned in this section