Abdul Bari, president of Himalayan Adventures (HA), sat in his office in central Gilgit bazaar looking at the sun set in the majestic Himalayan Mountains. The tourist season for 1998 in Northern Areas of Pakistan (NAP) had just ended. For the next seven months, until April 1999, the foreign or domestic tourists would not be visiting the NAP for climbing, trekking or hiking. 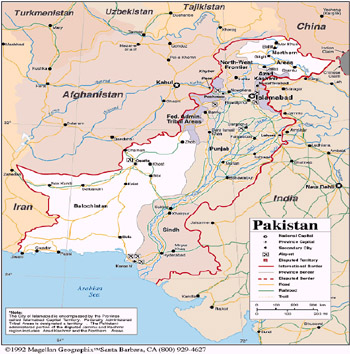 Figure 1: Map of Pakistan and the NAP

The 1998 season was a turbulent year for the Pakistani tourist industry in general and NAP's tourist industry in particular, which provides the developing country with more than 50% of its $14 billion tourism revenue. Although this turbulence was attributed to the overall decline in customer base after Pakistan and India tested their nuclear devices in summer of 1998, Abdul Bari thought otherwise. After talking to many of his clients, AB knew the real reason was the better logistical arrangements, customer service and lower costs that other foreign competitors were providing to their clients in HA's market segment, namely adventure tourism in the Himalayan and Karakorum mountain ranges of Central Asia. These competitors included the tour operators from Australia, England, Germany, India, Nepal and Bhutan.

As estimated in the World Bank Country Development Report (1999), the travel and tourism market provides Pakistan a total of annual revenue of $14 billion. Four of the 10 highest peaks in the world lie in the NAP, which houses the mountain ranges of Karakorum, Himalaya, Pamir and Hindu-Kush. The rugged beauty of the region, along with its unique culture, offers a potential tourist an experience that is enjoyable, challenging and enriching. The Pakistani Tourism Development Corporation estimates that foreign visitors to the country have explored only 20% of the NAP territories.

HA started as a partnership between a mountain climber and a business student in January of 1995. The main niche or specialty market of the company is trekking, bicycling and the cultural safari tour market, though the company has facilitated mountaineering expeditions in the past. During the tourist season, i.e., May to September, based on tours that have been reserved, the company hires porters and guides, who are then assigned to each visiting group and stay with the group for the duration of the tour. To achieve economies of scale, and for logistic and client safety reasons, the company has always focused on selling its packages to a group of five people. The average customer load per season for the company is between 130–160 customers, with an average profit margin per head at $500.

One-hundred percent (100%) of HA's customer base is of foreign origin. The breakdown in terms of nationalities is shown in Table 1.

Due to the nature of NAP (NAP as supposed to a province of the country, is a federal controlled territory under the supervision of Pakistani Army), all foreigners visiting the area have to appear for a personal interview at the Pakistani Embassy or Mission office in their respective countries before they can be given a permission to visit the NAP. This is often a cumbersome and expensive procedure for potential clients of the HA. In addition, there is often no updated information available to the potential clients on visa details, health immunizations and insurance, currency, weather conditions, baggage and fitness requirements. Furthermore, tourists have no quick way of finding information on the trip packages offered by HA or other travel operators. They often get this information via word of mouth from people who have visited the NAP. To further add to their woes, the marketing and information channels adopted by government departments are inadequate, outdated or incomprehensible. As it currently stands, customers have to refer to many different sources of information for planning their trip. This information is generally gathered in a piece-meal style from multiple Web resources, the Lonely Planet bookstore and other mass media resources.

The Profit & Loss statement, since its inception, is shown in Table 2 on the following page.