A Redundant Array of Independent Disks (RAID) is a series of disks that can save your data even if there is a catastrophic failure on one of the disks. While some versions of RAID make complete copies of your data, others use the so-called parity bit to allow your computer to rebuild the data on lost disks.

Linux RAID has come a long way. A substantial number of hardware RAID products support Linux, especially from name brand PC manufacturers. Dedicated RAID hardware can ensure the integrity of your data even if there is a catastrophic physical failure on one of the disks.

Depending on your definitions, RAID has nine or ten different levels, which can accommodate different levels of data redundancy. Only three levels of RAID are supported directly by RHEL 3: levels 0, 1, and 5. Hardware RAID uses a RAID controller connected to an array of several hard disks. A driver must be installed to be able to use the controller. Most RAID is hardware based; when properly configured, the failure of one drive in a RAID 1 or RAID 5 array does not destroy the data in the array. Linux, meanwhile, offers a software solution to RAID. Once RAID is configured on a sufficient number of partitions, Linux can use those partitions just as it would any other block device. However, to ensure redundancy, it's up to you in real life to make sure that each partition in a Linux software RAID array is configured on a different physical hard disk.

This level of RAID makes it faster to read and write to the hard drives. However, RAID 0 provides no data redundancy. It requires at least two hard disks.

Reads and writes to the hard disks are done in parallel, in other words, to two or more hard disks simultaneously. All hard drives in a RAID 0 array are filled equally. But since RAID 0 does not provide data redundancy, a failure of any one of the drives will result in total data loss. RAID 0 is also known as 'striping without parity.'

This level of RAID mirrors information to two or more other disks. In other words, the same set of information is written to two different hard disks. If one disk is damaged or removed, you still have all of the data on the other hard disk. The disadvantage of RAID 1 is that data has to be written twice, which can reduce performance. You can come close to maintaining the same level of performance if you also use separate hard disk controllers. That prevents the hard disk controller from becoming a bottleneck.

And it is expensive. To support RAID 1, you need an additional hard disk for every hard disk worth of data. RAID 1 is also known as disk mirroring.

While this level of RAID is not directly supported by current Linux distributions associated with Red Hat, it is still supported by the current Linux kernel. RAID 4 requires three or more disks. As with RAID 0, data reads and writes are done in parallel to all disks. One of the disks maintains the parity information, which can be used to reconstruct the data. Reliability is improved, but since parity information is updated with every write operation, the parity disk can be a bottleneck on the system. RAID 4 is known as disk striping with parity.

Like RAID 4, RAID 5 requires three or more disks. Unlike RAID 4, RAID 5 distributes, or 'stripes,' parity information evenly across all the disks. If one disk fails, the data can be reconstructed from the parity data on the remaining disks. RAID does not stop; all data is still available even after a single disk failure. RAID level 5 is the preferred choice in most cases: the performance is good, data integrity is ensured, and only one disk's worth of space is lost to parity data. RAID 5 is also known as disk striping with parity.

RAID is associated with a substantial amount of data on a server. It's not uncommon to have a couple dozen hard disks working together in a RAID array. That much data can be rather valuable.

During the Red Hat Installation and Configuration exam, it's generally easier to do as much as possible during the installation process. If you're asked to create a RAID array, it's easiest to do so with Disk Druid, which only works during installation. You can create RAID arrays once RHEL is installed, but as you'll see in the following instructions, it is more time consuming, and involves a process that is more difficult to remember.

However, if you're required to create a RAID array during your exam and forget to create it during the installation process, not all is lost. You can still use the tools I describe in this chapter to create and configure RAID arrays during the exam. And the skills you learn here can serve you well through your career.

The exam may use examples from RAID levels 0, 1, and or 5. However, if the PC that you're using on the exam includes only one physical hard disk, you may have to configure multiple RAID partitions on the same disk.

If continued performance through a hardware failure is important, you can assign additional disks for 'failover,' which sets up spare disks for the RAID array. When one disk fails, it is marked as bad. The data is almost immediately reconstructed on the first spare disk, resulting in little or no downtime. The next example demonstrates this practice in both RAID 1 and RAID 5 arrays. Assuming your server has four physical drives, with the OS loaded on the first, it should look something like this: 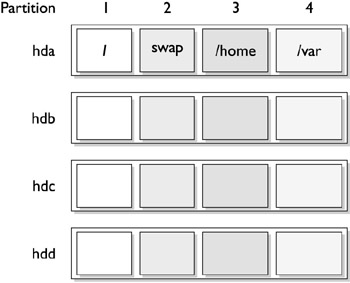 All four drives (hda, hdb, hdc, hdd) should be approximately the same size.

This first example shows how to mirror both the /home and the /var directories (RAID 1) on Drive 2 and Drive 3, leaving Drive 4 as a spare.

You need to create nearly identically sized partitions on Drives 2 and 3. In this example, four disks are configured with four partitions of the same size. If you use the Linux fdisk program, use the t command to toggle the drive ID type. You can then set the partition to type fd, which corresponds to the Linux raid autodetect filesystem. You'll get to test it out for yourself shortly in an exercise, as well as a lab at the end of this chapter.

Table 3-4 shows what some of the commands are, along with a brief description of what they do. If you haven't already done so, it's time to format these partitions and convert them to the default ext3 filesystem.

The Linux format command is mkfs; with the right switch, you can automatically set it up to ext3 with a journal. For example, the following command formats the /dev/hda4 partition:

If the partitions in /etc/raidtab are new, repeat this command for all of those other partitions.

Partitions from older Linux computers may be formatted to the ext2 filesystem, which is essentially the same as ext3 without a journal. You can add journaling to an older partition with a command such as:

When a journal is added to the ext2 filesystem, it upgrades that partition to the ext3 filesystem.

If it works, you'll see the result in the dynamic /proc/mdstat file. You can now mount the device and format it with the appropriate mkfs command, and finally mount it on the Linux directory of your choice. You can even set it up to be automatically mounted through /etc/fstab, as described in Chapter 4.

For a RAID 5 array on the /var partition (in order to preserve mail, print spools, and log files), the /etc/raidtab file should be modified as follows:

Now you can run mkraid /dev/md0 to initialize this RAID 5 device. You can then format and mount this RAID array on the Linux directory of your choice.

Now you can run the mkfs command to format each RAID array. It's fairly simple; now that you've created arrays such as /dev/md0 and /dev/md1, you can work with them as if they were any other hard drive partition. For example, you can format these arrays to the ext3 filesystems with the following commands:

The process is straightforward-for example, if you wanted to mount the /home/mj directory on the first RAID array, you'd run the following commands (assume the /hometmp directory exists):

Setting up RAID on a critical set of files such as a /boot directory partition is a bit trickier. Because of the importance of this data, manually copy the contents of the /boot directory (as well as the boot loader file, /etc/grub.conf or /etc/lilo.conf) to a different physical drive.

But that's not the last step. You may not get full credit for your work on the exam unless the directory gets mounted on the RAID array when you reboot your Linux computer. Based on a standard RHEL 3 /etc/fstab configuration file, you might add the following line to that file:

Before this line can work, you'll need to set the label for this directory with the following command:

I describe the /etc/fstab file, including the meaning of the data in each these columns, in more detail in Chapter 4.

Don't do this exercise on a production computer. If you have a computer with Red Hat Enterprise Linux already installed with several different physical hard drives that you can use for testing, that is best. One alternative is to use virtual machine technology such as VMWare, which can allow you to set up these exercises with minimal risk to a production system. You can also set up several IDE and SCSI hard disks on a VMWare machine. When you're ready, use the Linux fdisk techniques discussed in Chapter 3 to configure the following two-drive partition scheme:

Now with the following steps, you can create a mirror of hda3, which stores the /home directory, to the hdb4 partition. (The partition sizes do not have to be identical.)

If you're making fdisk changes on a production computer, back up the data in the /home partition first. Otherwise, all data on the current /dev/hda3 will be lost.