There are two main boot loaders associated with Red Hat Enterprise Linux: GRUB, the GRand Unified Bootloader, and LILO, the Linux Loader. Red Hat is moving toward making GRUB the only boot loader for its Linux distributions. You can't even install LILO during the Fedora Linux installation process.

There are a couple more clues. LILO is still included in the RHCE and RHCT exam requirements as of this writing. However, LILO is no longer included in the publically available outline for RH300, the main Red Hat prep course for the RHCE exam. But you'll need to come to your own conclusion on whether to study LILO for your exam.

To understand the role of a boot loader, take a step back from Linux. When you boot your computer, the BIOS starts by detecting basic hardware, including your hard drives. Once it's done, it looks for the boot loader on the Master Boot Record of the first available disk. If you're working with an older PC, the BIOS can't find your boot loader unless it's located within the first 1,024 cylinders of the hard disk.

Newer BIOSes overcome this problem with Logical Block Addressing, which is also known as LBA mode. LBA mode reads 'logical' values for the cylinder, head, and sector, which allows the BIOS to 'see' a larger disk drive.

Red Hat is moving toward GRUB, the GRand Unified Bootloader as the only way to start its Linux distributions. When you start your computer, your BIOS looks for the /boot directory and finds the GRUB menu, which will look similar to Figure 3-2. If you've configured your computer with multiple operating systems, you can use the GRUB menu to boot any operating system detected during the Linux installation process. 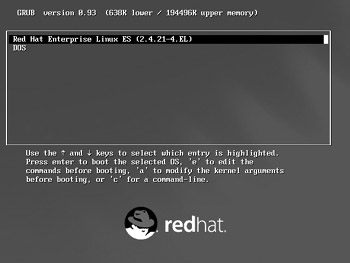 If you need to do something special with GRUB, you can edit the commands. If GRUB is password protected, you'll need to start with the p command. Use the e command to temporarily edit the file. You'll see a number of basic commands that you can use to modify GRUB, as shown in Figure 3-3 and Table 3-3. You can use these commands to test different GRUB configurations. They can help you troubleshoot problems with the GRUB configuration file without booting, editing, and rebooting your system. That could possibly help you save time during the Troubleshooting and System Maintenance exam. But once you find the solution, make sure to record the change in the GRUB configuration file, /etc/grub.conf. 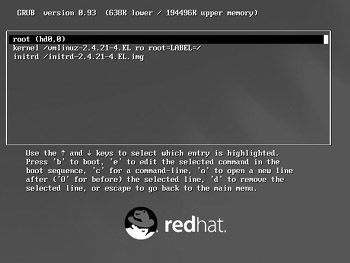 You can also use GRUB to boot other operating systems, including various versions of Microsoft Windows. See Chapters 5 and 11 for more information, including a detailed line-by-line analysis of a dual-boot /etc/grub.conf file in Chapter 5.

If you've previously installed LILO and now want to install GRUB, edit the /etc/grub.conf file and then run the grub-install /dev/xdy command, where xdy represents the hard disk with your /boot directory.

If you're troubleshooting GRUB, the GRUB menu can help you experiment with changes quickly. However, if you find the solution in this way, you'll still need to change (and test) the GRUB configuration file, /etc/grub.conf. If you find a problem with GRUB during the Troubleshooting and System Maintenance exam and are unsure about the solution, testing changes through the GRUB menu could save you time. However, until you record the change in the GRUB configuration file, /etc/grub.conf, you won't get credit for the work that you've done.

The more traditional boot loader is LILO, the Linux Loader. It has been deprecated from RHEL 3 as well as Fedora Linux. Since it's no longer a part of the RH300 curriculum, I doubt that you'll see it on the RHCE exam. However, it is still a part of the RHCT prep course (RH133) curriculum as of this writing. You'll have to make your own judgment on whether you want to take the time to study LILO for your Red Hat exam.

The LILO configuration file is /etc/lilo.conf. If you edit this file, you need to implement these changes with the lilo command. The following shows a typical /etc/lilo.conf file:

Now here's the line-by-line interpretation of this file:

This forces the lilo boot: prompt to appear on the console.

This forces LILO to wait five seconds (50 tenths of a second) before moving to the default operating system, labeled linux.

The system looks for boot and map information on the first IDE hard disk.

This is the secondary boot loader.

This opens a graphical file that you see during the boot process.

This uses linear addresses, and not standard hard disk geometry, to find the /boot directory.

This is the actual virtual memory compressed kernel (version 2.4.21, with the -4 representing the Red Hat build number) used for this particular Linux system.

This identifies the 'boot option' label that appears if you press TAB at the LILO prompt.

This reveals the location of the second stage loader, the RAM disk.

During installation, the RAM disk filesystem is started in read-only mode. After the second stage is finished with a few tests, the RAM disk is unloaded from memory, and the real root partition is mounted from the filesystem, normally in read/write mode.

This adds a command to the kernel. The root=LABEL=/ command points to the label associated with the root directory, which you can find with the e2label command described in Chapter 11.

The next section is another boot option-in this case, to boot Windows 98 on the first partition, /dev/hda1.

The table is the location of the partition table to be used-in this case, the first physical IDE hard disk. If you edit this file, you need to run the lilo command to write the result to the appropriate boot record, usually the Master Boot Record (MBR) of your hard drive.

To pass a parameter to GRUB, type the a command in the first GRUB menu. This allows you to append the command sent to the kernel. After typing the a command, you might see a command line similar to the following:

A wide variety of boot parameters are available; run the man bootparam command for more information.

Except for a normal boot of Linux, single-user mode is the most commonly used option. This is the system maintenance mode for experienced Linux administrators. It allows you to perform clean backups and restores to any partitions as needed from local hardware. It also allows you to run administration commands, recover or repair password and shadow password files, run filesystem checks, and so forth.

In some cases, to get out of single-user mode you just have to type exit and your system will go into multiuser mode. If you have made changes or repairs to any partitions, you should reboot the computer with the reboot command. If you've made changes during your exam, you'll want to test those changes with a reboot.

The LILO first stage will also indicate some common and not-so-common problems:

Occasionally, there may be an error due to partition table changes, bad blocks, and so forth. On these rare occurrences, you will only get partial LILO prompts: