Before we start, its important to understand what we mean by the term XML document. The term refers to a collection of content that meets XML construction rules. When we work with XML, the term document has a more general meaning than with software packages. In Flash, for example, a document is a physical file.

While an XML document can be one or more physical files, it can also refer to a stream of information that doesnt exist in a physical sense. You can create these streams using server-side files; youll see how this is done later in this book. As long as the information is structured according to XML rules, it qualifies as an XML document.

XML documents contain information and markup. You can divide markup into

Each XML document contains one or more elements. Elements identify and mark up content, and they make up the bulk of an XML document. Some people call elements nodes .

Here is an element:

This element contains two tags and some text. Elements can also include other elements. They can even be empty, i.e., they contain no text.

As in HTML, XML tags start and end with less-than and greater-than signs. The name of the tag is stored in between these signs < tagName > .

The terms element and tag have a slightly different meaning.

If an element contains information or other elements, it will include both an opening and closing tag <tag></tag> . Empty elements can also be written in a single tag <tag/> so that

There is no preferred way to write empty tags. Either option is acceptable.

You can split elements across more than one line as shown here:

Each element has a name that must follow a standard naming convention. The names start with either a letter or the underscore character. They cant start with a number. Element names can contain any letter or number, but they cant include spaces. Although its technically possible to include a colon ( : ) character in an element name, its not a good idea as these are used when referring to namespaces. Youll understand what that means a little later in the chapter.

You usually give elements meaningful names that describe the content inside the tags. The element name

is more useful than

You cant include a space between the opening bracket < and the element name. You are allowed to include space anywhere else, and its common to include a space before the /> for empty elements. In the early days of XHTML, older browsers required the extra space for tags such as <br /> and <hr /> .

When an element contains another element, the container element is called the parent and the element inside is the child .

The family analogy continues with grandparent and grandchild elements as well as siblings .

You can also mix the content of elements, i.e., they contain text as well as child elements:

XML is case sensitive. For example, <phoneBook> and </phonebook> are not equivalent tags and cant be used in the same element. This is a big difference from HTML.

Elements serve many functions in an XML document:

Attributes are stored in the start tag of an element after the element name. They are pairs of names and related values, and each attribute must include both the name and the value:

Attribute values appear within quotation marks and are separated from the attribute name with an equals sign. You can use either single or double quotes around the attribute value. Interestingly enough, you can also mix and match your quotes in the same element:

You might choose to use double quotes where a value contains an apostrophe:

You would use single quotes where double quotes make up part of the value:

Keep in mind that tags cant be included within an attribute.

An XHTML image tag provides an example of an element that contains attributes:

Attribute names must follow the same naming conventions as elements. You cant start the name with a number, and you cant include spaces in the name. Some attribute names are reserved, and you shouldnt use them in your XML documents. These include

You can rewrite attributes as nested elements. The following

could also be written as

There is no one right way to structure elements and attributes. The method you choose depends on your data. The way youre going to process the XML document might also impact on your choices. Some software packages find it harder to work with attributes compared with elements.

Text refers to any information contained between opening and closing element tags. In the line that follows , the text Sas Jacobs is stored between the <fullName> and </fullName> tags:

Unless you specify otherwise , the text between the opening and closing tags in an element will always be processed as if it was XML. This means that special characters such as < and > have to be replaced with the entities &lt ; and &gt; . The alternative is to use CDATA to present the information, and Ill go into that a little later.

Ive listed the common entities that youll need to use in Table 2-1.

Character entities replace reserved characters in XML documents. All tags start with a less-than sign so it would be confusing to include another one in your code.

This code would cause an error during processing. If you want to include a less-than sign in text, you can use the entity &lt; :

You can also use a hexadecimal number to refer to a character. In that case, you need to include an x in the number so the reference would start with &#x . The hexadecimal entity reference for is &#xE9; . The Character Map in Windows tells you what codes to use. Open it by choosing Start 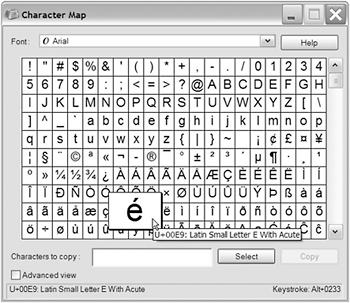 Figure 2-1: The character map in Windows displaying the small letter e with an acute accent

The bottom left of the window shows the hexadecimal value. Dont forget to remove the trailing zeroes and add &#x to the beginning of the value. The right side shows the Unicode number. Again, youll need to remove the first 0 from the code.

Comments in XML work the same as in HTML. They begin with the characters <!-- and end with --> :

Comments are a useful way to leave messages for other users of an XML document without affecting the way the XML document is processed. In fact, processing software always ignores comments in XML documents. You can also use comments to hide a single line or a block of code.

The only requirements for comments in XML documents are that

CDATA stands for character data. CDATA blocks mark text so that it isnt processed as XML. For example, you could use CDATA for information containing characters such as < and > . Any < or > character contained within CDATA wont be processed as part of a tag name.

CDATA sections start with <![CDATA and finish with ]> . The character data is contained within square brackets [] inside the section:

Entities will display literally in a CDATA section so you shouldnt include them. For example, if you add &lt; to your CDATA block it will display the same way when the XML document is processed.

The end of a CDATA section is marked with the ]]> characters so you cant include these inside CDATA.

The listing that follows shows a simple XML document. Ill explain this in detail a little later in the chapter. You can see elements, attributes, and text: