There are many benefits to creating VLANs in your internetwork. Remember that in a layer 2 switched network, the network is a flat network, as shown in Figure 3.1. Every broadcast packet transmitted is seen by every device on the network, regardless of whether the device needs to receive the data.

In a flat network, all users can see all devices. You can not stop devices from broadcasting or users from trying to respond to broadcasts. Your only security consists of passwords on the servers and other devices.

By creating VLANs, you can solve many of the problems associated with layer 2 switching. 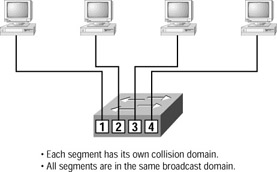 Broadcasts occur in every protocol, but how often they occur depends on the protocol, the application(s) running on the internetwork, and how these services are used. VLANs can define smaller broadcast domains, which means that it is possible to stop application broadcasts to segments that do not use the application.

Although some older applications have been rewritten to reduce their bandwidth needs, there is a new generation of applications that are bandwidth greedy, consuming all they can find. These are multimedia applications that use broadcasts and multicasts extensively. Faulty equipment, inadequate segmentation, and poorly designed firewalls can also add to the problems of broadcast-intensive applications.

These bandwidth-gobbling applications have added a new factor to network design because broadcasts can propagate through the switched network. Routers, by default, send broadcasts only within the originating network, but layer 2 switches forward broadcasts to all segments. This is called a flat network because it is one broadcast domain.

As an administrator, you must make sure the network is properly segmented to keep problems on one segment from propagating through the internetwork. The most effective way of doing this is through switching and routing. Because switches have become more cost-effective, a lot of companies are replacing the hub-and-router network with a pure switched network and VLANs. The largest benefit gained from switches with defined VLANs is that all devices in a VLAN are members of the same broadcast domain and receive all broadcasts. The broadcasts, by default, are filtered from all ports that are on a switch and are not members of the same VLAN.

Every time a VLAN is created, a new broadcast domain is created. VLANs are used to stop broadcasts from propagating through the entire internetwork. Some sort of internal route processor, or an external router must be used in conjunction with switches to provide connections between networks (VLANs).

In a flat internetwork, security is implemented by connecting hubs and switches together with routers. Security is then maintained at the router, but this causes three serious security problems:

By using VLANs and creating multiple broadcast groups, administrators now have control over each port and user. Users can no longer just plug their workstation into any switch port and have access to network resources. The administrator controls each port and whatever resources it is allowed to use.

Because groups can be created according to the network resources a user requires, switches can be configured to inform a network management station of any unauthorized access to network resources. If inter-VLAN communication needs to take place, restrictions on a router can also be implemented. Restrictions can also be placed on hardware addresses, protocols, and applications.

When a VLAN gets too big, you can create more VLANs to keep the broadcasts from consuming too much bandwidth. The fewer users in a VLAN, the fewer are affected by broadcasts.

The Collapsed Backbone and the VLAN

Switches create greater flexibility and scalability than routers can by themselves because switches define the network VLANs and VLAN port assignments. You can group users into communities of interest, which are known as VLAN organizations.

Because of switches, we don’t need routers anymore, right? Wrong. In Figure 3.3, notice that there are four VLANs, or broadcast domains. The nodes within each VLAN can communicate with each other but not with any other VLAN or node in another VLAN. When configured in a VLAN, the nodes think they are actually in a collapsed backbone, as in Figure 3.2. What do these hosts in Figure 3.2 need to do in order to communicate to a node or host on a different network? They need to go through the router, or other layer 3 device, just as they do when they are configured for VLAN communication, as shown in Figure 3.3. Communication between VLANs, just as in physical networks, must go through a layer 3 device. 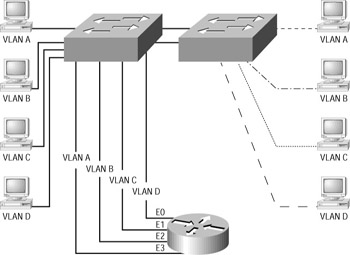