Most i5/OS commands have parameters to fine-tune the purpose or the task to be performed by the command. For example, the Display Message (DSPMSG) command uses a parameter to determine what messages to display. If parameters didn't exist, you would need a different command for each message queue, which would be impractical.

The command prompter can be activated by keying in the name of the command at the command line and pressing F4 instead of Enter. When you do this, the system presents the prompt panel for that command. For example, you can invoke the prompter for the Change Library List (CHGLIBL) shown in Figure 9.7 by entering the following command: 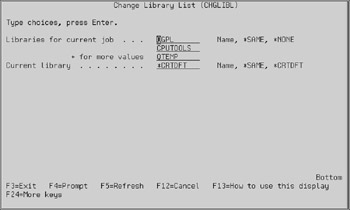 You also can invoke the command prompter by typing a question mark (?) immediately followed by the command name at the command line and pressing the Enter key.

In the previous illustration, the CHGLIBL command has two parameters. The first parameter ("Libraries for current job") is a list, while the second parameter ("Current library") is a normal parameter.

The command parameter names are not shown unless you press F11 or change your user profile using USROPT(*CLKWD). The first parameter has a keyword of LIBL, and the second parameter's keyword is CURLIB.

If you want to remove one of the elements of the list, blank it out and press Enter. Optionally, you can type a less-than (<) character, at least one space, and press Enter. Both methods yield the same result.

If you want to insert a new element to the list, somewhere in the middle, type a greater-than (>) symbol in the input field before what you want to insert, at least one space, and press Enter. The command prompter will present a different panel, where you can type one or more new elements. When you are done inserting, press Enter. The system returns to the command prompter with the new values already inserted.

If you want to add a new element at the bottom of the list, type a plus (+) sign and at least one space on any of the elements of the list and press Enter. The system presents a different panel to let you type the new elements to be inserted. When you are done, press Enter again and the system takes you back to the command prompter, with the new values already appended at the end of the list.

Although the process of lengthening a parameter's input field can be repeated several times (until the input field reaches its maximum length of 512 spaces), it doesn't guarantee that the command prompter is going to accept that many characters. For example, the Display User Profile (DSPUSRPRF) command expects a user profile name in the USRPRF parameter. Because it is a name, it can be up to 10 characters long. You can lengthen the input field to 32 characters and even type 32 characters in the input field. When you press Enter, however, the prompter will reject your input because it is too long.

While the cursor is on an input field, you can also press F4 (or type a question mark "?" and at least one space, then press Enter) to obtain a list of allowed values for the parameter in question.

For example, suppose you need to submit the DSPLIB command to batch. Begin by typing SBMJOB at the command line, and press F4 to prompt the SBMJOB command. The first parameter, CMD, is where you enter the command you want to submit for batch execution. Type DSPLIB and press F4 again. The system prompts the DSPLIB command. It is one prompt within another. Figure 9.8 illustrates this process. 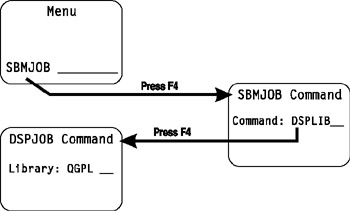 F10 is not always available. When it is, it displays additional parameters not normally shown at first.

F11 displays the parameter keywords or omits them if they are already present. You can change your user profile to USROPT(*CLKWD) if you would rather see the keywords all the time.

F14 displays the entire command string, including all the parameters to which you have given values. The string is displayed the way the command would look if you had entered it manually at the command line or included it in a CL program. This function key is helpful for documentation purposes.