Struts and the Model

As you know, Struts is a framework that is used to build applications based on the Model-View-Controller (MVC) architecture. Because the MVC organization is at the foundation of Struts, it is not possible to fully utilize Struts without a clear understanding of each part of the MVC architecture. Therefore, this and the following two chapters examine in depth the Model, View, and Controller portions of a Struts application, beginning in this chapter with the Model.

What Is the Model?

The MVC architecture dictates that the Model layer should be self-contained and function independently from the View and Controller layers. That way, the core application code can be used over and over again with multiple user interfaces. For example, you could have a Web interface for the application as well as a stand-alone or wireless interface. Each interface (Web, stand-alone, and so on) would have its own code for the user interface (View) but would reuse the core application (Model) code. This is the basis for the MVC architecture: having a clean separation of responsibilities and reducing coupling between application layers.

The typical Model layer of a correctly designed MVC application can be broken down into three conceptual sublayers. Each sublayer can be thought of as a component or responsibility of the Model. Figure 3-1 illustrates this breakdown. 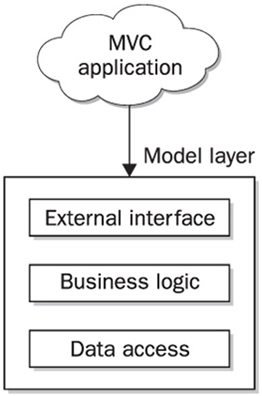 Each sublayer does not necessarily represent a separate set of classes, but rather the Model's set of responsibilities. You may choose to house a specific function's code for all layers in one large class, or you may break down each sublayer into fine-grained objects. The level of object granularity is up to you, and what's best and/or necessary really depends on the size and complexity of your application. The following are the three sublayers: