All Active Directory elements such as shared folders, printer, users, groups, and the like (also known as Active Directory Objects ), are controlled by at least one computer acting as an Active Directory Domain Controller (DC) . Obviously, the DC is very important, and should contain the best possible hardware that you can get. To add to your hardware decisions, Microsoft makes four different versions of Server 2003: Standard, Enterprise, Datacenter, and Web editions, all designed to fit differing environments. While this book primarily covers the Standard and Enterprise editions, Microsoft has posted a breakdown of the differences among the various flavors of Server 2003, along with the minimum and recommended system configurations, right on the server's own web site:

However, to get the most from your server, double or quadruple the recommended Random Access Memory (RAM) and processor speed. For larger networks, consider running a server with two or more processors. This improves the server's ability to handle multiple tasks and increases the server's overall performance. (Note: this will reduce or eliminate the calls from frustrated users asking why the server is performing so slowly) . Microsoft also provides a useful tool that allows an administrator to estimate how much computing horsepower might be needed to deploy Active Directory. Called the Active Directory Sizer Tool , the software was geared for Windows 2000 Server, and not Windows Server 2003. However, it still provides useful information:

The "bread and butter" of your electronic work environment, a server is useless without the necessary hard disk space in which to store your users' work. Be careful when selecting your storage options. It's easy to be tempted to buy a single, large (and inexpensive) hard drive for user data, thereby saving a few thousand dollars on your server configuration. However, what happens if this large hard drive fails? Since you've put all your "eggs in one basket ," your system is now useless to your users. Even if you have a comprehensive backup strategy, you are still going to have some downtime. And while downtime means that you're earning every penny of your paycheck, users who depend on a server being up 24/7 are running out the door chanting " server's down going for bagels".

The best way to make sure that your users don't start running out for baked goods is to implement a storage scheme that uses a Redundant Array of Inexpensive Disks ( RAID ). As its name implies, RAID's biggest and best asset is its redundancy. Instead of relying on one hard drive, RAID pools the resources of many hard drives, all working in concert with one another. So what happens if one of the hard drives fails in a well designed RAID system? The others "pick up the slack ," the system keeps working, and your users don't notice a thing. You can then replace the defective drive, and the RAID system automatically incorporates the new drive into the system. RAID systems can come configured as part of a server or they may be purchased separately as stand-alone towers or rack mount units. Windows Server 2003 even lets the administrator format inexpensive hard drives and span them together as a RAID set. Unfortunately, this RAID set is controlled through software, which means that your server's central processing unit (CPU) will be doing all the work to keep track of the RAID. A better (and faster) solution is to use a hardware based RAID solution in which the hard drives in the RAID set have their own dedicated processor, freeing the main CPU to work on server oriented tasks.

Like Windows Server 2003 itself, RAID comes in many flavors. The illustrations on the following pages outline the most common and useful RAID levels: RAID 0, RAID 1, RAID 0+1, RAID 3, and RAID 5. 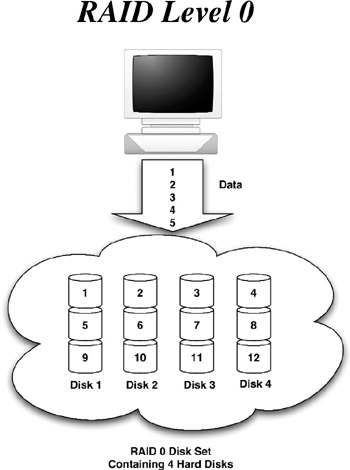 Figure 1-2: An array of hard drives formatted for RAID level 0 (which is also called striping under Windows Server 2003) has one huge advantage over the other RAID formats: raw speed. This speed is achieved by layering, or striping, bits of information across each member hard drive. The result is one big, fast hard drive array. But, along with the large advantage of speed comes an equally as large disadvantage : zero redundancy. Since each drive contains only bits and pieces of the whole set of data, if even one of these drives fails, the entire chain falls apart. For this reason, RAID 0 is not a recommended configuration unless raw speed is the only concern. 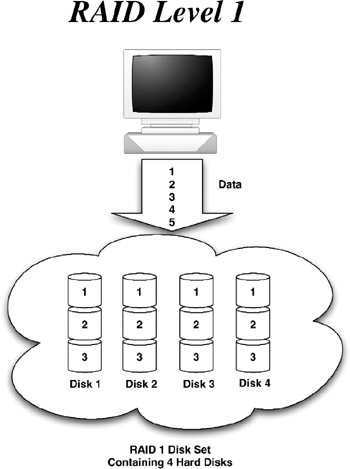 Figure 1-3: Hard drives formatted at RAID level 1 (called "mirrored" in Windows Server 2003) configures one hard disk as a real-time, exact duplicate of another hard drive. Unlike RAID 0, RAID 1 excels at fault-tolerance. If one of the drives dies, the other, an exact replica of the first, takes over. RAID 1 has two main drawbacks. First, it requires you to double the amount of storage that you require. For example, if you need 900GB of hard disk storage and want to use RAID 1, you will have to purchase an additional 900GB to act as the mirror. In many organizations, the financial obstacles of RAID 1 are just too great. The other drawback is performance. A RAID 1 set does not perform much better than a single hard drive, and nowhere near the performance of RAID Level 0. 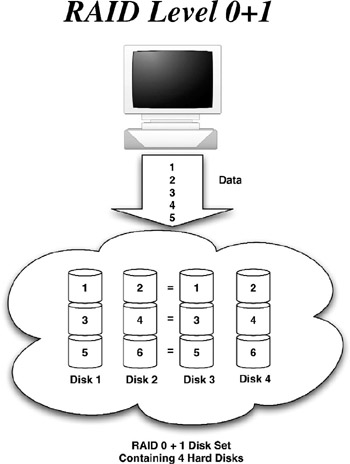 Figure 1-4: A subset of RAID 1, called RAID 0+1, mixes the speed advantages of RAID 0 with the redundancy of RAID 1. RAID 0+1 takes a RAID 0 striped set, and mirrors it to another striped set. The advantages to this configuration are obvious: we have speed, and we have redundancy. However, the cost disadvantage of RAID 1 is compounded with 0+1. For example, if you have a RAID 0 striped set of three drives, you must purchase an additional three drives onto which to mirror that set. 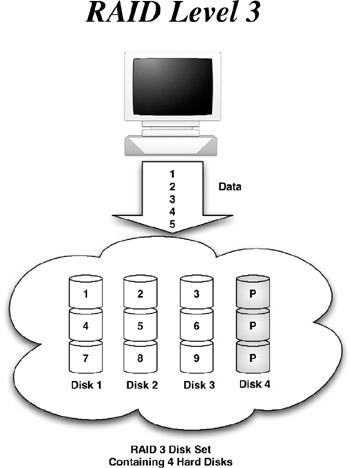 Figure 1-5: A RAID set formatted for RAID level 3 adds both speed and redundancy. Like RAID 0, data is striped over each individual disk, providing for the greatest possible speed. However where RAID 0 provides no fail safe for a drive failure, a RAID 3 set uses redundancy information known as parity. This data is stored on a single drive and contains the information needed to reconstruct the RAID set in the event of a failure. When a drive fails in a RAID 3 set, all users connected to the server can continue working until the administrator replaces the defective unit. Once the drive is replaced , the RAID set is automatically rebuilt, on the fly. 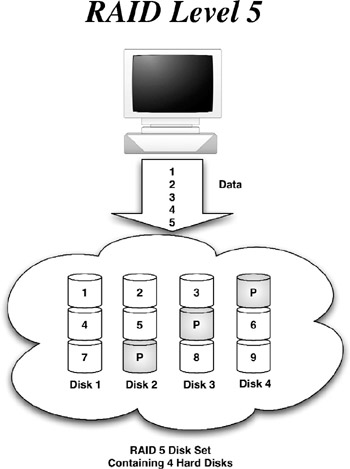 Figure 1-6: Hard drives configured as RAID level 5 combine the advantages of RAID 0 and 3, while making the system much more economically feasible . Data is striped over the various drives in the set, giving RAID 5 similar speed to RAID 0. But instead of dedicating one hard drive for parity information as in RAID 3, level 5 distributes the parity throughout all the drives in the set. This gives each and every drive in the set the ability to reconstruct the data stored on the other drives in the event of a failure. And because the amount of disk storage needed does not have to be doubled , as in RAID 1, RAID 5 saves money.

So where do you go for RAID systems? Most server vendors , such as Dell, offer servers that contain built-in RAIDs. Other solutions include a Network Attached Storage (NAS) , which is a fancy name for a stand-alone device containing hard drive storage (with options for RAID) that connects to the network. Most NAS devices contain their own server operating system to integrate into most computing environments, including those that use Active Directory. Still other solutions include towers or rack mount enclosures that contain hard drives configured for RAID. For more information, check out the following sites, or do a search on http://www.google.com for hardware RAID:

Now that you have your server muscle car plans ironed out, we need to start building the highway that it is to run on. In the bygone years of ethernet networking, 10-base was considered fast. But data size has grown enormously, and continues to grow. Today's organizations require moving gigabytes of data between server and client, and the wires that connect this whole thing together must be able to perform at reasonable speeds. For most applications, placing all client computers on 100-base ethernet (also known as fast ethernet ) is sufficient to move data around at 8 to 10 megabytes per second. However, while a fast ethernet connection is good enough for a single client computer, it is somewhat lacking for a server. The server must have the widest "pipe" for data to flow efficiently . On busy networks, a fast ethernet connection may be saturated too quickly. For this reason, adding a 1000-base connection (also known as gigabit ethernet ) to the server is a wise practice. Ten fast ethernet connections can fit inside one gigabit pipeline, which reduces the chances of the server's lines getting congested . In order to take advantage of gigabit ethernet, you must have at least category 5e (also known as CAT5e ) grade cabling.

This brings us to another point: switches versus hubs. Both are centralized devices that allow an administrator to connect multiple devices for the sole reason of communicating with one another. But not all network peripherals are created equal. Network hubs provide a centralized point for which devices may communicate; they are not extremely efficient at this task, however. When many different devices connected to a hub begin to flood it with network activity, the hub may become congested. A more efficient approach is to use a network switch. A switch is a kind of intelligent hub. A switch forwards network requests only to and from those devices that request information over the network.

A switch helps to alleviate the network congestion that can occur when multiple network devices communicate with one another simultaneously . The result is a much cleaner (and orderly) network.

As shown in Figure 1-7, a cost-effective networking scheme is to connect your clients to a switch that has many fast ethernet ports, and one or two gigabit ports. Although purely gigabit switches exist, they can be pricey. 3COM and Asante make very reliable gigabit ethernet switches: 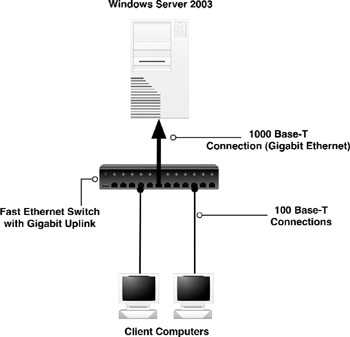 Figure 1-7: In this example, two client computers are connected to a network switch using fast ethernet. The Windows Server 2003 computer, in turn , is connected to the network switch via a special gigabit ethernet port, giving it 10 times the bandwidth of the client computers. This gigabit port reduces the chances that the server's communication to the clients will become saturated.