The DMTF's common models contain an infrastructure for managing authentication information for any user ”see page 117. This section deals more with the practical details of authenticating clients accessing the WBEM server.

The basic WBEM architecture, as illustrated in Figure 4.4 on page 39, contains a position for a security plug-in and this provides the focus for client authentication: it is really no more than an exit point to external authentication tools such as an LDAP or Radius server.

The normal mechanism for a WBEM client to request an operation from a WBEM server is, of course, through CIM-XML over HTTP. HTTP, as defined in RFC2068, uses a challenge/response authentication protocol: the client makes a request, the server offers the client a number of mechanisms by which it can authenticate itself, the client selects the most secure one that it supports and authenticates itself. The server then checks the authentication and, if satisfied, answers the request. This process is repeated for each operation carried out over HTTP, as illustrated in Figure 7.12. 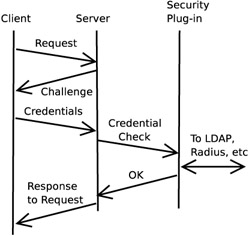 There are therefore three ways of authenticating a WBEM client: Basic Authentication over SSL, Digest Authentication, or some other protocol applicable to your application.