There are three words that should apply to any replication architecture: keep it simple. The more complex it is, the more difficult it is to maintain over the long term . In the event of a disaster (see the later section, Disaster Recovery with a Replicated Environment ), the simpler the topology, the easier it should be to recover. You should also test the normal operation of replication and simulate an actual switch to the replicated secondary, and, if applicable , a switch back to the original Publisher, prior to rolling out your replication architecture in a production environment.

The Snapshot Agent is used with all models of replication. It prepares schema and initial data files of published tables and stored procedures, stores the snapshot files, and inserts information about initial synchronization in the distribution database. The Snapshot Agent typically runs at the Distributor.

There is one Snapshot Agent per publication. When you create a snapshot of data, there are physical files, or objects, associated with it, and it differs with the model of replication, as shown in Table 8-2. These objects vary in number depending on your replication configuration s publication and articles; there is no exact formula to calculate it. You can only get the exact count by testing. All forms of replication imply that a snapshot initiates them.

Once you create the initial snapshot, you should consider backing up the snapshot files if you want to use them to initiate replication again. You can either back up the snapshot folder itself or allow another execution of the snapshot agent to generate another snapshot. As part of a disaster recovery plan, you can use the old or the new snapshot files (depending on your strategy) for the publication prior to creating a new subscription or reinitializing an existing one.

When you use transactional replication, you should not put the Publisher and Distributor on the same server, which is otherwise known as a Local Distributor (see Figure 8-1). 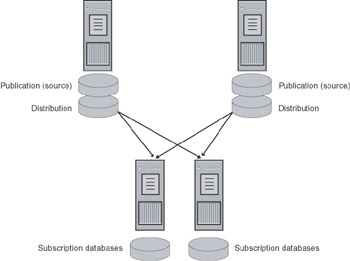 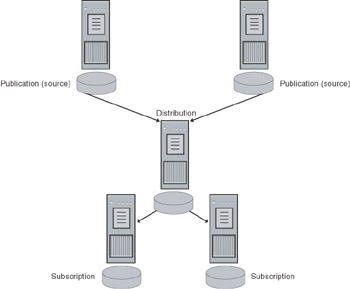 Using a Remote Distributor has the following benefits:

This scenario is not dissimilar to using a Remote Distributor. You still have a Publisher and a Distributor, but you then take a Subscriber and have it publish the data out to other servers. That Subscriber is then known as a Republisher, or a Publishing Subscriber (see Figure 8-3). In this case, the Republisher would act as its own Distributor, or you could even set up another one. This scenario would benefit you if your company has sites around the world. Because of network issues, it is easier and more cost-effective to have more local resources generating data to Subscribers. This also increases the availability of your solution so that even if the original Publisher or Distributor goes down, if there are changes to be propagated out to other Subscribers that are still in the Republisher, they will still get to the other Subscribers. 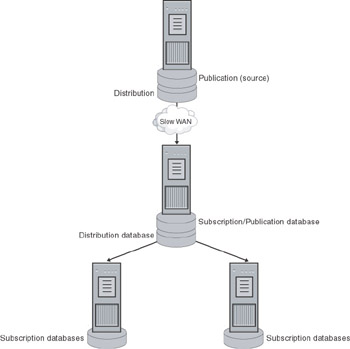 SQL Server service packs will definitely make an impact on your replication implementation. If you apply them wrongly, you might need to reinitialize your replicated environment or use the disaster recovery procedures detailed here. See the section Applying a SQL Server 2000 Service Pack in Chapter 13, Highly Available Upgrades, for more information on replication and SQL Server service packs. The order in which you apply the service pack to your servers participating in replication matters. First, you must update the Distributor; then comes the Publisher; and finally the Subscriber.

You can also use replication to help keep your database available during a service pack install, much like you can use log shipping. Switch to the standby, and allow updates to happen on the standby assuming that it can function as the primary in every way it needs to. Once the service pack is done on the Publisher, switch back and upgrade the Subscriber. This is only applicable after the Distributor upgrade, which might even be the same server as the Publisher.

Replication makes an impact on your planning for your disk capacity (in addition to anything outlined in Chapter 4 and the rest of the book), which is an obvious concern for any highly available environment. You do not want to run out of disk space before you even implement your solution. Table 8-3 walks through the requirements for each model of replication.